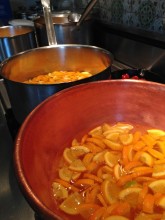 Every January I look forward to my annual marmalade making. The dark days of winter lighten up and my home fills with the delicious aroma of simmering citrus peel. Los Angeles is known for its backyard citrus with neighborhood orange trees dating back to the early 1920s. Some of these oranges are simply too bitter to eat and are left lying rotting on the ground, but they make the world’s best marmalade with a true taste of terroir.

I simmer my jams in the copper bowl intended for whisking egg whites — jams cook much more quickly and evenly that way, but a large stainless steel saucepan is fine too. When making jams and preserves, I often turn to an old favorite, Catherine Plagemann’s Fine Preserving, a book dating back to 1967. I imagine these recipes are just about as old as most of the citrus trees in Los Angeles.

1. Quarter and slice oranges into thin strips taking care to discard seeds. Cover the oranges with water twice their bulk, cover, and let stand at room temperature from 12-24 hours. Sterilize the jelly jars.

2. In a large pan, simmer the oranges and juice on medium high heat for 20 minutes, stirring occasionally and adding a little water if necessary. Let the mixture cool, cover and leave for 24 hours (Transfer to a bowl if it is in a copper pan).

3. The next day, measure up to 2 quarts of fruit and juice into the same saucepan and stir in ¾ cup sugar for each cup of fruit and juice. Bring to a boil and cook quickly over high heat, stirring often with a wooden spoon, especially when the marmalade is almost cooked. If scum forms on the surface, skim it with a metal spoon. The marmalade is ready when it starts to jell, forming a characteristic double drip off the stirring spoon (120̊ F/106◦C on a candy thermometer).

4. Let the marmalade cool 3-5 minutes, ladle into jars and seal at once.