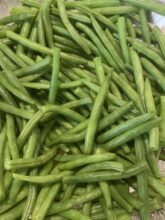 EMMA’S BURNT BEANS When we lived in Burgundy we were spoiled by our elderly gardener who loved to grow green beans. He would bully his elderly wife into picking them so we had literally buckets delivered each day. Then it was up to us to prepare them for the table. Luckily we had lots of 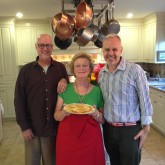 Socca, traditional to Provence, are thin pancakes based on chickpea flour and mixed only with water and a spoonful of olive oil. Possible flavorings include an aromatic spice such as cumin or a chopped herb such as thyme or rosemary. Socca have become favorite cocktail snacks, at their best piping hot, though they are just 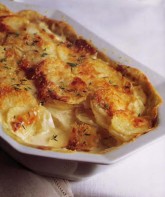 Gratin dauphinois, the chic sister of scalloped potatoes, must be the ultimate comfort food in winter. This superlative version was passed on to me by Chef Fernand Chambrette, a brilliant, cantankerous man whose cooking on a good day was legendary (don’t mention the bad days). The chef simmers the potatoes in milk to remove their

If you can’t afford truffles, you indulge in Truffade say the inhabitants of Auvergne, notoriously among the coldest and most rugged parts of France. Often served with sausages, Truffade is a potato cake flavored with bacon and laden with cheese, a buttress against the worst weather. Nippy Cantal is the local hard cheese, and Gruyère can be substituted.

Baked Potato With an Egg

Escoffier calls for serving these potatoes with just an egg baked inside, but I like to add a bit of crisp diced bacon, or some caramelized onions, or possibly some baby shrimps, hiding them in the potato shell under the pureed potato. I’d recommend a small baking potato such as an Idaho, weighing 10-12 ounces.