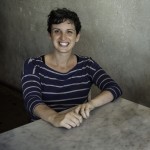 On October 5th, Zoe Nathan will bring her rustic baking to La Varenne. Zoe Nathan describes herself as a baker with a modest method for preparing all things dough and dessert related. Her approach to baking is centered around several components achieving harmony: discrete sweetness, often coming from in-season fruit; salt as a flavor enhancer; and color “as a flavor,” thanks to the degree of browning in the oven. She believes that, “baking is all about process”.

Nathan’s pastries have received acclaim in the Los Angeles Times, Los Angeles magazine, Food & Wine, Saveur, and Bon Appétit, among other publications. Before becoming involved in the Rustic Canyon family of restaurants, Nathan honed her craft at Tartine in San Francisco, Lupa in New York and bld in Los Angeles.

We are so excited to be featuring Zoe as part of our celebrity series this year.