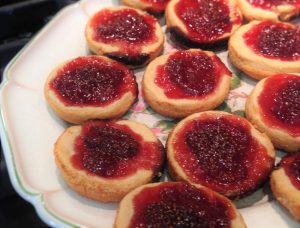 Thursday was baking day. Emily rose an hour early to stoke the fire with logs cut from the spinney behind the house, boosted with a few precious lumps of coal which was strictly rationed — this was World War II.  Just about everything else was rationed too, certainly food. We had 2 ounces of butter each per week (that’s 4 tablespoons) and at one stage half an egg (i.e. one every two weeks). More than a cup of sugar per person per week sounds a lot, but it soon disappears when that is all there is. It was the farm that saved us, the 30 cows were milked twice a day, and Mrs. Wilkinson kept hens that supplied a more or less steady supply of eggs.

The kitchen centered on one quite small cast iron range. The fire was stoked in an open grate and heated the oven beside it. A flue with a damper limited the supply of air to the chimney; more air, more heat which lapped at the oven, then rushed up the chimney to heat the water tank on the floor above. Simple you might think, but so much depended on the wind, which in winter blew straight from Russia and howled down the chimney, destroying baking day and Emily’s temper.

On a good day, I would sidle into the room, “get from under me feet”, she would mutter and I would curl into the only armchair in the room, covered with faded chintz,  the springs broken.  First of all she would make a batch of dough, enriched with lard (a pig was one of the farm perks) and a bit of the precious butter. She hived off half and put the rest to cool on the slate slab in the north-facing larder (there was no refrigerator that I remember).

Custard tarts were the first candidate. After rolling out the first half of dough, Emily would grease and then line a 12-tin sheet of pie pans with rounds cut with a sharp-edged tumbler.  The filling was a classic custard: eggs, milk from the farm, a spoonful of sugar, a pinch of salt and a generous grating of nutmeg. Quickly cooked, the tarts were lightly set and browned on top, Emily must have set them low down in the oven because I don’t remember soggy, uncooked bottoms.

Very early on I learned when baking had gone wrong, a cake had fallen or scorched on top or her jam tarts had overflowed and stuck in the pans. Emily was a good curser, brief but pungent. She watched her tongue when I was around but when lingering in the passage I soon learned a few shady words that were useful when my mother was not there. Emily was given to malapropisms, “he died of the Te Deums”, she once said, meaning the D.Ts (delirium tremens). “He’s ever so pandering”, meaning pompous, referring to the vicar.

All our rations went into Emily’s sweet treats — jam tarts and ribbon cake golden with egg yolks, pink with cochineal dye and dark with cocoa, cornstarch cake which I have never found elsewhere, with a crispy top and slightly sticky texture on the tongue. I can still taste it…..  No matter how restricted our supplies, Emily would manage ginger biscuits, crisp cookies that were indispensable for dipping in our morning tea.

Baking day was Thursday and the rack on the sideboard would fill with delicious odors right beside my chair. But we were not allowed a taste until Friday, Emily being convinced that freshly baked goods were bad for the digestion. My tongue would hang out with longing but my mother did not care, she had not a sweet tooth. All this was for Emily and me. I grew up fine, healthy child, pink-cheeked and strong. My mother would urge me to take exercise outdoors, but no, I did far better in the kitchen.

Click the link below to see Emily’s Jam Tarts recipe.