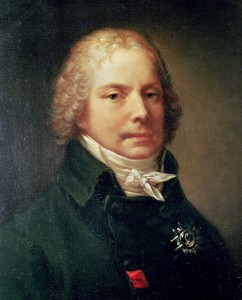 I have just happened upon this charming piece written by Mark, my husband, as I was doing some research on Antonin Carême and the dishes he cooked for Talleyrand in the early 19th century. What a good find!

“I’ve recently come across an anecdote about Talleyrand at dinner in Paris, which I have never seen before in the usual sources. It appears in the 1787-1817 diaries of Frances, Lady Shelley (published for the first and last time in 1912) and caught the attention of Maria Polushkin Robbins, editor of the small “The Cook’s Quotation Book – A Literary Feast” published in 1983 by Pushcart Press in New York. I suspect that Lady Shelley’s diary remained obscure until it was added to student reading lists and it has now been reproduced widely in inexpensive editions available from Amazon.com.

I checked the quotation in Ms. Robbins’ book against the original in the diaries themselves and it is in essence the same. The date is August 25. No year is given but evidently the Duke of Wellington was in Paris just before the battle of Waterloo and accompanied Lady Shelley to dinner to mark the occasion. Lady Shelley was Frances Winkley by birth and married the heir to the Shelley baronetcy, thus becoming the poet’s aunt. Her diary is a lively, colourful account of her socializing in Pars at a time when so many legendary figures were there to negotiate a lasting European peace.

“…Let’s go to Crauford’s and end with Talleyrand’s,” she said. After a number of other observations, Lady Shelley continues: “At the beginning of the week we dined with Talleyrand… During the whole repast the general conversation was upon eating. Every dish was discussed, and the antiquity of every bottle of wine supplied the most eloquent annotations. Talleyrand himself analysed the dinner with as much interest and seriousness as if he had been discussing some political question of importance.”

In my own experience of accompanying my foodie wife, Anne Willan, on special dining occasions, I have observed how the topic of cooking, eating and drinking can take over the entire conversation. I am encouraged that even such an august personage as the Prince de Talleyrand fell into the same habit and wonder if it is peculiar to the French? The British, I suspect, are sill embarrassed by conversation about food and cooks, and prefer small talk about the weather. Or has the rise of celebrity chefs in England changed the dynamic of English table talk while dining?”