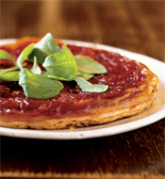 The original Tarte Tatin was made with apples, but the same concept of deeply caramelized fruit turned out on a crisp pastry base has inspired today’s versions featuring pear, quince, tomato, or even eggplant or Belgian endive. In Tarte Tatin à la Tomate, a drizzle of vinegar highlights the caramel, yielding an intense, savory tart to serve with crisp greens as a first course or light main dish. It also makes an excellent accompaniment to chicken or to game such as rabbit.

Don’t be concerned if the tomatoes look a trifle charred when the tart is turned out, as they will taste all the better. If you have some puff pastry trimmings in your freezer, by all means use them. If not, for the small amount here, I suggest you use ready-prepared frozen dough. No special pan is needed, just two frying pans with ovenproof handles.

Heat the oven to 275°F/140°C. Sprinkle the cut sides of the tomatoes with salt and pepper and set them aside. Sprinkle the sugar in a large frying pan with an ovenproof handle and cook over medium heat, stirring occasionally, until the sugar melts and toasts to golden caramel, 3 to 5 minutes. Take the pan from the heat and at once add the vinegar, standing back as it will sputter and fume. Return it to the heat, stir to dissolve the caramel, and then stir in the oil. Again take the pan from the heat and add the tomatoes, cut side down, packing them tightly so they all touch the bottom and pushing the rosemary and bay between them.

Roast the tomatoes until they are very tender and wrinkled, 2 to 2 1/2 hours. Forty-five minutes before they are done, add the unpeeled garlic cloves to the pan. If liquid remains at the end of cooking, evaporate most of it by cooking the tomatoes briefly over high heat, taking care they do not scorch.

Oil a second frying pan with an ovenproof handle and transfer the tomatoes to it, arranging them snugly cut side down in a pattern. Discard the herbs and leave the garlic behind, along with any juices, in the first pan. Add the wine to the garlic and heat it, stirring to deglaze the juices and boil them down to 2 to 3 tablespoons. Pour the liquid and garlic through a strainer over the tomatoes, then push through the garlic pulp. Set the tomatoes aside to cool. The tomatoes may be cooked up to a day ahead and stored in the refrigerator.

Heat the oven to 400°F/200°C. On a floured work surface, roll out the puff pastry to a 10-inch/25-centimeter round and prick the dough so it rises evenly. Transfer it to the pan to cover the tomatoes and tuck any excess dough down around the fruit. Bake the tart until the dough has risen and is crisp and golden brown, 15 to 20 minutes. Let the tart cool for 5 minutes, then turn out it onto a platter and garnish with the arugula. Alternatively, let it cool in the pan, then turn it out and serve it at room temperature. Tarte Tatin à la Tomate may also be cooked up to 8 hours ahead and kept in the pan. Warm it briefly in the oven before turning it out.

Excerpted from THE COUNTRY COOKING OF FRANCE
by Anne Willan, Chronicle Books, 2007.