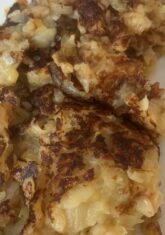 Grandma still cannot approach the town of Cheltenham without a shudder. This is where she was at boarding school for six unhappy years. Given her love of cooking, it might have been the execrable food that did her in, but there was much more to it than that. Calvinist principles of self-denial permeated the menus that followed a leaden cycle of naked baked beans and boiled rice, baked potato without sour cream, Welsh rarebit without the cheese, and sausages in tasteless custard, followed by a dozen or more slices of bread and margarine, as much as we could cram down in the allotted time. For thirteen weeks we never saw a piece of fresh fruit.

It seems that even that Victorian superman, Sir Richard Burton, complained bitterly about conditions at his boarding school in Richmond, where a reign of terror prevailed and “Saturday was a day to be feared on account of its peculiar pie, which contained all the waifs and strays of the week”. The only dish I remember with any pleasure from Cheltenham Ladies College is Bubble and Squeak, with its crispy browned bits of fried potato hidden among the cabbage. As cook, be brave and let the vegetables stick so they brown (they bubble and squeak) on the bottom of the frying pan. This is a great way to recycle leftover vegetables.

1. To cook the cabbage: Bring a large pan of salted water to a boil. Add the cabbage and boil, uncovered, until tender but still firm, 5-8 minutes. Rinse with cold water and drain thoroughly.

2. To cook the potatoes: Put them, unpeeled, in a large pan of salted water and bring them to boil. Simmer until just tender: 15-18 minutes. Drain them, let cool slightly and peel them. Return them to the pan and crush them coarsely with a masher or fork – a few lumps do not matter.

3. To finish: Heat a tablespoon of the fat in a non-stick frying pan and fry the onions until soft but not brown. Add the remaining fat and heat well. Mix in the cabbage and potatoes and season with salt and pepper. Pack the vegetables down lightly and fry without stirring until the bottom is crisp and nicely browned. Stir to mix this crust into the vegetables, then fry again to make another crust. Continue until the crisp brown pieces are thoroughly mixed in with the vegetables: 15-20 minutes. Taste and adjust the seasoning. Serve very hot.