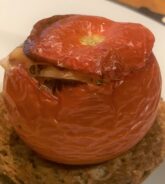 When we lived in Burgundy, our tomatoes would ripen quite suddenly with the first heat wave, just right for stuffing with the goat cheese made nearby. Ironically the farmer was called Monsieur Cochon, Mister Pig. The tomatoes are best served lukewarm – Mediterranean temperature.

1 Heat the oven to 400˚F/200˚C. Core the tomatoes, cut a shallow lid from the top of each one and set it aside. Using a sharp spoon, scoop out and discard most of the seeds from the tomatoes. Sprinkle the insides with salt and pepper. Toast the bread slices and stamp out the largest possible round from each with a cookie cutter or a thin-rimmed drinking glass. Brush the rounds lightly on both sides with olive oil and set them in a small oiled baking dish.

2. Crumble the cheese into a bowl. Stir in the garlic, thyme and parsley with salt and pepper. Taste and adjust the seasoning. Using two teaspoons, fill the mixture into the tomatoes, mounding it well above the rim of the tomato cups. Drizzle the top with 1-2 tablespoons olive oil and set the tomatoes on the toasts, with the lids on top.

3. Bake the tomatoes in the oven 30-40 minutes, until the skins start to split and the cheese filling is hot when tested with a metal skewer. They can be prepared up to 6 hours ahead and kept covered in a cool place.

A single large tomato, ripened on the vine to a deep red, then roasted until brown and the skin splits, makes the perfect breakfast with a slice of bacon, or supper when perched on a slice of wholewheat toast.

Heat the oven to 325˚F/160˚C and set a shelf in the center. Wipe 6 large (½ – ¾ pound/225-300 g each) tomatoes with damp paper towels and scoop out the cores. Halve the tomatoes through the equator to reveal the seeds. Gently squeeze the halves to loosen and discard some of the seeds. Pack the tomatoes, cut side up, in an oiled baking dish. Drizzle 2-3 tablespoons olive oil on top and sprinkle with 2-3 cloves garlic chopped, 3-4 tablespoons parsley, 2 teaspoons salt and pepper to taste. Bake the tomatoes until they are browned and tender, with the skins split, 50-60 minutes. From time to time during cooking, baste with the oil and juice in the baking dish. Serve the tomatoes hot or at room temperature, with a slice of wholewheat toast on the side if you like.