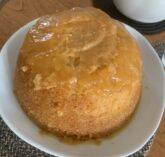 In this basic recipe for steamed pudding, the lemon curd can be replaced with raspberry jam, golden syrup or orange marmalade. For a ginger pudding, substitute golden syrup for lemon curd and flavor the syrup with a bit of chopped fresh ginger and a teaspoonful of ground ginger.

1.Set up your steamer arrangement. Spoon 3-4 tablespoons of lemon curd in the bottom of the pudding bowl.

2.For the pudding batter: Sift the flour with the baking powder. Cream the butter with an electric mixer, beat in the sugar and continue beating until light, 2-3 minutes. Beat in the eggs, one by one, beating well after each addition; with the last egg, include 1-2 tablespoons of the flour so the eggs do not separate from the butter mixture. Using a metal spoon, fold the remaining flour alternately with the remaining lemon curd into the butter mixture. Spoon this batter into the bowl, arranging a layer of cheese cloth to cover the top of the pudding bowl. Tie a string around the rim of the bowl to hold down the cheesecloth and fold the ends over the pudding batter, knotting them on top to cover the pudding.

3.Steam the pudding until the center is hot when tested with a metal skewer, 2-2½ hours. Let the pudding cool to very warm before unwrapping the cheesecloth and unmolding the pudding onto a platter for serving. Serve vanilla custard or ice cream in a separate bowl.

TO STEAM A PUDDING

Butter the pudding bowl and add the pudding mixture – it should fill almost to the rim. Cut an 18-inch/40-cm length of cheesecloth, lay it over the bowl so the mixture is covered and tie a piece of string outside and under the rim of the bowl to secure the cheesecloth. Fold the ends of cloth over the pudding mixture and tie the ends loosely in double knots in the center so the pudding is completely covered but with room to rise. Using the knots, lift the pudding into a steamer pan with a lid. (A steamer can be devised with 3-4 heatproof ramekins set, rim upwards, in a large, very deep saucepan. Set the filled pudding bowl on the ramekins, add 2-3 inches of boiling water, cover the pan with a lid and bring the water back to a boil. Simmer the pudding for the time stated in the recipe, taking care to keep enough water boiling in the pan. To test cooking, insert a metal skewer into the center of the pudding mixture – it should be hot to the touch when withdrawn. Let the pudding stand in the pan until the bowl is cool enough to handle, then lift it out with the help of the cheesecloth knots. Untie the knots, turn the pudding onto a warm platter and discard the cheesecloth and string. Serve the pudding at once. To keep a pudding hot for longer, leave it in the bowl with the steamer turned off, then unmold it just before serving.