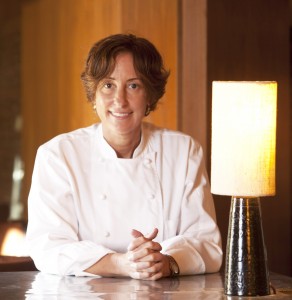 I can’t think of many chefs who would be better suited to join us for class two weekends before Thanksgiving than Suzanne Tracht, the chef and owner of Jar in Los Angeles. Suzanne has a way of making American comfort food classics really sing on the plate, with an emphasis on fresh, local ingredients. I suspect Amelia Simmons, who wrote the first American cookbook in 1796, would be proud!

Suzanne Tracht is among the rare group of American women chefs who have achieved the ultimate dream of owning their own restaurant. With Jar, her modern chophouse in the heart of Los Angeles, Tracht dazzles Angelenos with the allure of her familiar retro dishes from the American culinary repertoire. Her contemporary interpretation of dishes like Pork Belly and Chocolate Pudding prove that delicious food can also be unpretentious. “I love feeding people. We want guests to feel like they are in the ultimate living room, where they can have their favorite foods without pretence. I’ve always wanted to create a restaurant space where there’s a sense of community and neighborhood,” says Tracht. The faithful patronage and camaraderie among Suzanne Tracht’s guests are a fulfillment of her vision.

Born and raised in Phoenix, Arizona, Suzanne’s epicurean journey began as a teenager when she apprenticed under renowned chef Siegbert Wendler at the four-star rated Arizona Biltmore Resort and Spa. After three years, Suzanne moved to Southern California to pursue her culinary aspirations. She spent the late 1980s cooking in the kitchens of the Westin Century Plaza Hotel and Spa and the prestigious Hotel Bel-Air where she trained under the direction of Chef George Morrone. In 1991, Suzanne became sous chef at Noa Noa in Beverly Hills, among the earliest of the Cal-Asian fusion restaurants introducing flavors of the East to the West. The following year, Tracht enthusiastically accepted the offer to work under the guidance of Mark Peel and Nancy Silverton in the kitchen at Campanile. This was a key move that placed Suzanne amongst the “who’s who” of Southern California’s most influential generation of chefs. Soon named the restaurant’s Chef de Cuisine, Tracht polished her earthy style of cuisine as she mastered the management tasks of running a busy kitchen. Even through the duress of working on the kitchen line until the final days of two consecutive pregnancies, Tracht acknowledges Campanile as one of the most valuable and intrinsic experiences of her career.

Suzanne’s next move came in 1996 when she launched her first solo venture as Executive Chef at Jozu. Her innovative menu of Cal-Asian dishes which blended bright flavors with an array of textures and spices, won multitude of accolades. It was here that she began to develop a true following. In its debut year, Jozu ranked number two for “L.A.’s Best New Restaurants” in Los Angeles magazine’s annual restaurant issue.

With the opening of Jar in 2001, Tracht realized her dream of owning and operating her own restaurant. Jar was her concept, and the public and critics became quick fans of what was to be among the first in the steakhouse rage across the United States. In addition to designing a menu with universal appeal, the restaurant was instantly embraced as a gathering place for locals.

Suzanne and her longtime Chef de Cuisine Preech Narkthong are responsible for re-inventing chophouse classics to reflect Tracht’s influences and technique. “Traditional steak houses don’t base their menus on the season, but at Jar, it’s our mission,” says Tracht. First-time diners who go to Jar for its prime quality meat cuts are often surprised to find the best vegetables dishes in Los Angeles hailing from the kitchen. Using traditional braising techniques as well as a range of Asian products available locally, Tracht turns out simple yet rich “Sides” of Brussels Sprouts, Creamed Corn, Sautéed Pea Tendrils and Japanese Purple Potatoes memorable in their purity.

In 2002, Food and Wine magazine honored Tracht with a well deserved spot among the Best New Chefs of the year. Jar has received stellar reviews in Los Angeles, Angeleno and the Los Angeles Times. In her three star review of the restaurant, Los Angeles Times restaurant critic S. Irene Virbila says, “Tracht’s attention to detail sets Jar apart. It’s not only good, it’s absolutely reliable. How rare is that?” Brad Johnson of Angeleno gives Jar four stars saying, “I can’t think of anyone who makes a better pot roast than Tracht.” Patric Kuh gives Suzanne the highest accolades in his review of Jar. “Suzanne Tracht has a French sense of proportion, and Italian appreciation of minimal intervention, and a Japanese awareness of modulation. She might have the most finely tuned and modern sensibility of any cook working in L.A.,” says Kuh in his review for Los Angeles magazine, December 2005. For years Jar has been among Los Angeles’ top 75 restaurants named in the magazine.

Tracht, well recognized among the leading women chefs in the United States, was inducted into the Fine Dining Hall of Fame by Nation’s Restaurant News in May 2007.  She participated in Fortune magazine’s Most Powerful Women Summit in 2003, 2005, and 2009.  Tracht was honored at the 2009 Women in Food James Beard Foundation Awards gala in New York, was named 2009 Chef of the Year by Angeleno, appeared as featured chef at the 2010 World Equestrian Games in Kentucky, and as host chef for Argentina444, a culinary expedition highlighting top chefs and wineries of Argentina.  The Los Angeles Times magazine named Jar among the top restaurants that forged Southern California’s global reputation in August 2011.

If you’d like to take a cooking class with Suzanne or any other 2012 La Varenne Celebrity Chef Series Classes, please fill out the form below. We look forward to hearing from you and will be in touch shortly!