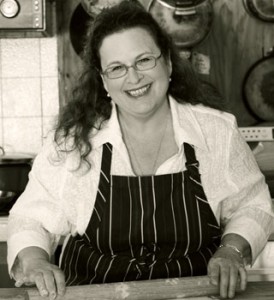 On October 20th, Evan Kleiman will bring her rustic California-Italian cooking to La Varenne. Evan has extensive experience as a chef, author, and restaurateur, and as the host of KCRW’s “Good Food,” she brings educated discussion about everything in the food world to the airwaves. I’ve been a guest on “Good Food” several times and am very happy that Evan will be joining us for this year’s La Varenne Celebrity Chef Series.

More about the “fairy Godmother of the LA food scene”:

Evan Kleiman is a true culinary multitasker. Chef, author, radio host, restaurateur and sought after speaker, she has been called “the fairy Godmother of the LA food scene” for her central role in bringing a community of food people together through her radio show Good Food. As host of the radio show Good Food on KCRW since 1997, Evan has interviewed more than 6000 guests ranging from celebrated chefs to local farmers, enabling her to explore every aspect of food and how it intersects with human life.

As proprietor and chef of Angeli Caffe for 28 years, Evan’s improvisational style, while rooted in the Cucina Povera of Italy, shows her reliance on simple ingredients and economical ingenuity to produce delicious and satisfying food with a fresh, honest, pared down aesthetic that people intuitively understand and appreciate. People just get it. The heart stays focused on who is across the table. It’s good eating, not haute cuisine dining. When Angeli opened in 1984 Evan was credited with reintroducing rustic Italian cooking to the U.S.

As a natural extension of her longtime exposure to everything to do with food, Evan’s interest now extends to issues of food policy and agro-ecology. The founder of LA’s Slow Food Chapter, which she ran for eight years, Evan now serves on the Stewardship Council for Roots of Change and is a member of the Los Angeles Food Policy Council. She is an active speaker on issues of food culture and sustainability and just to maintain a balance, is also attempting to become the Queen of Pie.

Evan is the author of eight books on Italian food and one video app, “Easy As Pie.”

If you’d like to take a cooking class with Evan or any other 2012 La Varenne Celebrity Chef Series Classes, please fill out the form below. We look forward to hearing from you and will be in touch shortly!