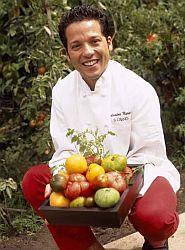 On February 28th, Salvatore Marino will bring his inimitable, contemporary Italian style cooking to La Varenne for a taste of Spring!

Sal has always cultivated more than just Italian dishes for his diners — he brings a life-long passion of craftsmanship and ingredients to the kitchens of Il Grano. As a second generation restaurateur, Marino grew up in and around the kitchen. After years of “unofficial training” in his father’s restaurant, he went to Italy and worked throughout the Italian peninsula in all kinds of local eateries, including the Michelin three-star Gualtiero Marchesi and the two-star Tornavento. In 1997, Sal opened Il Grano with the help of his brother, Mario and his sister Rosanna. Recently, this team opened La Bottega Marino, a lower-priced Italian deli restaurant right next door to Il Grano. Any night of the week you can find Sal cooking away in the adjoining kitchen.

Sal’s restaurants have received praise from such local publications as the Los Angeles Times and Los Angeles magazine as well as national magazines like Bon Appetit, The Wine Spectator and Food & Wine. Recent accolades include #1 Italian Restaurant in LA on Gayot.com, Top 10 in the US on Opinionated About Dining.com, and Top 99 Best Restaurants 2013 in LA Weekly.