The Oxford Symposium On Food And Power 2019 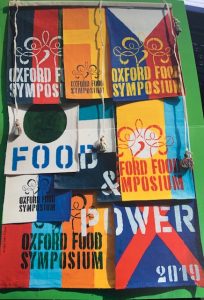 Early in July, Todd and I made our annual pilgrimage to the Oxford Symposium, held at St. Catherine’s College, a short walk from the historic center of the city. Not by accident, we arrived just in time for lunch, a restorative medley of mezzes my favorite Middle Eastern dishes cooked by local experts with the backing of Chef Tim Kelsey and the St. Cat’s kitchen. Tim is amazing, each year welcoming exotic cooks to his kitchen, regarding them not as invaders but as inspiration for new ideas.

Later in the day I much enjoyed the witty exposure of Laura Shapiro, about gender and power in food, using Virginia Woolf’s descriptions from A Room of One’s Own as a prime example. Moving on halfway around the world, who would have thought that Japanese sake was originally brewed within the household by women (disclosed by Voltaire Cang, the specialist researcher for a social education research institute in Japan). Across another ocean were the Eaton Sisters of New York, they had little to do with food but very much with power. The day closed with a Greek dinner inspired by author Aglaia Kremezi and Chef Michael Costa of Zaytina, the cooking was washed down with zesty white wines from the Austrian Tyrol.

Menu 1: The Hubb Community Kitchen, The Healing Power of Cooking Together

Am I the only traveler who avoids hearty breakfast in favor of weak tea brewed in my bedroom and a couple of shortbread fingers that I carry everywhere with me? At the Symposium this habit enabled me to grab a front row seat for the best plenary session of the weekend, architect and historian, Carolyn Steel’s A Tale of Two Cities: Paris, London and the Political Power of Food. This turned out to be a fascinating discussion of the placement of major cities, their need for food and thus for nearby fertile land – Paris and London are contrast examples, London on the river had a fluid system without shortages, inland Paris was plagued by strikes and difficulties. Cities blessed by good transport links, most often over water, such as Rome and Stockholm, had the best ability to grow large as had access to fertile land thousands of miles away. The port cities – Ostia, Leith, Alexandria — such cities became powers in themselves. 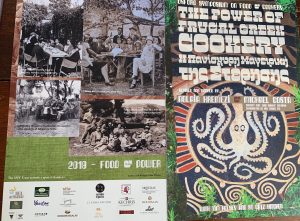 Equally enjoyable for me was the lecture by Michael Krondl on Sugar and Show: Power, Conspicuous Display and Sweet Banquets During King Henri III’s Visit to Venice in 1547. The array of goblets, flowers, sculptures and portraits, all created in sugar paste dazzled, both literally and figuratively.  I worked once with a pastry chef who had created similar marvels for the Elysée Palace in Paris and the designs and their construction have not changed in 500 years. They are sturdy but brittle, though quite easy to repair with cement of sticky sugar syrup. The main enemy is humidity, a wet day brings a

Menu 3: Borough Market, With her hands

The take-away of the Symposium is its value as an exchange of scholarly ideas in the food world, it was terrific to see the large number of young food scholars attending and providing high quality presentations of their research alongside masters like Marion Nestle, and Cathy Kaufman. As we said goodbye to the Symposium chairman, Elizabeth Luard, the closeout was far from sad. After a last sustaining lunch, we departed with cheery smiles and promises to “see you next year”, when the theme will be herbs and spices, stimulating food for thought.

One response to “The Oxford Symposium On Food And Power 2019”