Once again, my memories are better in focus than my point-and-shoot photos, and I write now, back in Boston, to summon up what made my trip so special on Viking’s Ullur on the “Tulips and Windmills” trip 4-13 April 2019. For one thing, I was travelling with a Viking “godmother,” Anne Willan, who years ago had christened your Hermod. And as comparison, I had a previous Viking trip, along with Rhône with her and her late husband Mark Cherniavsky on Heimdal in July 2016. (Full disclosure: I have known them since October 1972 when I worked for Anne as an editorial assistant on her early cookbooks.) 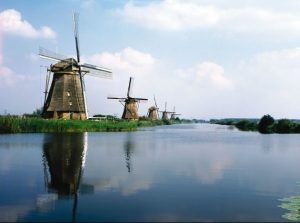 autifully-run boats. On the Rhône trip, I remember a concierge who got us tickets and transportation to the Lyon Opera. On Ullur, your Reception staffer Sandra got Anne and me tickets to an almost-sold out concert at the Concertgebouw in Amsterdam (as well as hair appointments in Antwerp). I mention this kind of service as invaluable for those of us who like to “leave the cruise” for private shore excursions. I’m full of praise too for the dining and bar staff and their old-school training. It is wonderful to be waited on better than (often) at home in America. And as someone who has written (for The Boston Globe) on design, I was fascinated by the particular rationale for the layout of your boats. All logical, and right, so easy to understand and to use. Ullur’s interior decor mates well with the nautical; I got the giggles from the fancy “bordello” lobby of one of your competitors.

So much of tourism is public and historic. Ullur was full of behind-the-scenes “moments.” Constraints of space make for challenging times for your bar staff. I watched an Ullur barman work his way up a narrow stair carrying a full tray of wine glasses. So they did not tumble, he placed another tray on top, and all was safe. Waiters popping dozens of bubbly for the Captain’s Toast p

arty then placed the corks on a huge white napkin, which was then gathered by the corners to make a carry-all. While the wines on the Rhône trip were properly French, Ullur gave us the chance to sample German vineyards.  Ullur chef Roland Waasdorp was more than the usual captain-of-kitchen: he has travelled widely and speaks well. His menus were more than ample, the lunch buffets inventive and the formal dinners satisfying.

An accident to my left foot in Boston meant I went on few of the walking trips. A consolation was the variety of the water views from the boat. We think of Holland as looking like the Dutch paintings of old, here the gleam of canal, there a belling windmill, all under cloudy but serene skies. I was amused at the sheer volume of graffiti in Amsterdam: in-your-face lettering on every quai and every bridge (but never/seldom in Belgium). The revelation to this American was how Holland manages to integrate functions on its waters into a scenic whole.  I recall many a stretch that offered maritime and suburban housing and commercial as equals, the continuum being the river shore and grass, and the occasional sheep in the meadows. 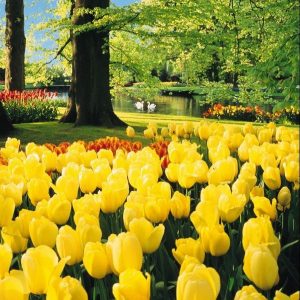 I was glad also of the chance to see in what ways the the Dutch are ahead of America in addressing climate change. Wind power is becoming popular with us. I had not realized till the views from Ullur that wind turbines were often in three sizes on the same plat. Or their different uses: not just for energy but also to lift water. And of course Holland’s constant battle with water has lessons for sea-level Boston. Where I live in the Back Bay, a neighborhood of 850 acres of land reclaimed from tidal marsh in the mid 19th century, one catastrophic storm would make us a Venice, and the Dutch are now advising the city on ways to deal with the higher seas expected as glaciers melt from global warming.

In New England, the old farms are closing. We were never much of an agricultural economy, in part because of the short growing season. The vogue is for boutique farms that raise fare to be trucked to farmers’s markets in the cities. Good that Holland can also make the case for commercial agriculture massed in small spaces, such shown on your tour of the glass houses that grow sweet peppers for the world. Those sky-reaching stalks had the aura of fairy tale. But how utterly practical the use of heat from a Microsoft Cloud installation across the road to warm them, and then the final disposition of the stalks as cattle fodder.  This tour, and the lesson on oysters at a yacht-club, were my two favorites. Bliss that one tour was paired with a ride on the adorable stream railway. As we arrived, a volunteer was blackening wooden spokes on the wheels. Not to belabor the point that tourism has often a manufactured air to it, but the train had the appeal that all hobbyists know and relish: doing something for its own worth.  I will bet that a good percentage of your older American male passengers has a home workshop, even a model railroad layout. 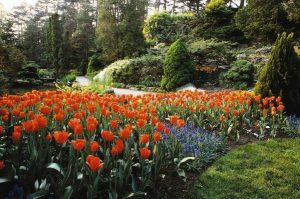 Early April in Holland brought another unexpected delight, and that was the role of trees in landscape. Again I speak from the prospect of my native New England where there are few flat surfaces. We are hills and valleys, and these tend to mass tree shapes, though they make our carpets of vivid autumn colors rightly famous. Flat Holland parades its trees in profile. That they were mostly not in leaf in early April only turned bare shapes into sculpture. I loved the pointy spires of the poplars, and, as evidence of the constant winds, the bent trunks of hedgerows. Giant tulip fields surely have their place in your spring trips. I found a special peace in the natural landscape on the water ways.

All Pictures from Viking River Cruises

This evocation of my recent lovely trip on a Viking Cruise along the canals and rivers of Holland comes from my longtime friend, Bostonian writer Margo Miller, who has a special gift for recreating time and place. She is the ideal holiday companion!