For me as a child in rural Yorkshire in the north of England, harvest time was the high point of our agricultural year, only comparable in excitement to 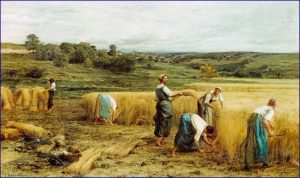 Christmas. Over the previous weeks, we would eye the ripening fields of wheat spreading down from our house on the hill, debating when the gold of the grain was dark enough, and dry enough, to start gathering the harvest.

An early morning start on cutting the grain was not possible because of damp from the overnight dew. So near to midday I would walk the half mile to the farm to help Mrs. Wilkinson, the farmer’s wife, to carry the lunch baskets out into the fields — the churns of tepid, milky sweet tea would be my job. We would choose a sheltered corner, if possible under a tree for shade, and lay out a massive coarse white cloth to flatten the harsh, prickly stubble of cut stalks. I would carefully set my churns of tea upright, chipped enamel mugs beside them.

Plain and plenty of it was the order of the day: unlimited floury bread, often baked at home; slices of ham, or streaky fat bacon, pork sausages, a massive cake with just enough dried fruit in it to merit the title fruit loaf, plums perhaps, or apples if they were already ripe. If the farmer’s wife were good at baking, she would make ginger biscuits, oatmeal buns, scones, and something called Yorkshire parkin, an oatmeal gingerbread dark with molasses. Or perhaps she would opt for Fat Rascals, a cross between a muffin and a scone. Let’s not forget the Wensleydale cheese, a mild, crumbly white cheese, easy to eat and traditionally served with apple pie.  “An apple pie without the cheese, is like a kiss without the squeeze” sums up the favorite local way to enjoy it.

By the time we arrived in the field, a wide swath would already have been mown around the swaying, golden center of wheat to clear the way for the reaping machine. Earlier in the day, the old-style experts with a scythe would have cleared a path in sweeping circles, leaving the younger, active women to follow, gathering and tying the stems in prickly sheaves, big bundles as big as two arms’ embrace. Then the machine moved in to tackle the dominant central square of grain, demolishing it to leave a trail of sheaves in its wake. 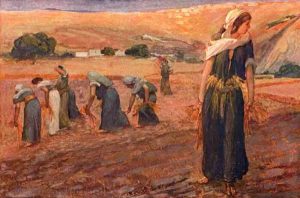 After the machine came another team of women, solid, experienced hands covered from neck to foot to protect from scratches. They set the sheaves stems-downward in what we called ‘stooks’, a half-dozen bundles arranged so the breeze could blow through and further dry the grain in the July sun. You can see them in Impressionist paintings, sturdy women, accustomed to work outdoors in the heavy heat. Fields were smaller than now, and with the tractor-driven machine that both cut and bound the sheaves, a whole 20-acre field could be mown in a single day. Providing of course that the fragile, fractious machine did not break down, a common occurrence.

Watching the stooks proliferate and the square of shimmering grain grow smaller, two or three men with shotguns would gather round and suddenly, to a chorus of shouts, rabbits and perhaps a partridge (a prized game bird) would break from shelter to be mown down by the shots, something a child never forgets. 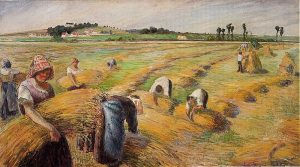 Harvest time was a team effort to beat the bad weather. Depending on their position, some fields would ripen before others, and neighbors did not hesitate to lend a hand on a nearby farm. In addition, Irish migrants were hired from year to year, making their way gradually north from farm to farm as the grain ripened. They were a rough lot, sleeping in the barns and claiming food and wages, whether or not the harvest was ripe. Beer was their tipple and they caused a lot of trouble in the local pubs.

Harvest was always a race against time, too many fields ripening at once, too little labor to work the fields, broken binding machines, and the weather.  Rain was the enemy number one and a quick shower could destroy all the drying effect of a day of sun. In a wet year the ears of grain never dried at all and became sodden, sprouting green in the fields for a disastrous harvest. No elevators for drying damp grain existed in those long-ago days.

I would like to round out this flashback with a harvest feast, a rousing celebration of hard work, cheerful music and singing long into the night, but no. My mind is blank. I suspect I must have been put firmly into bed before the fun started.

See the link for how to make Fat Rascals.