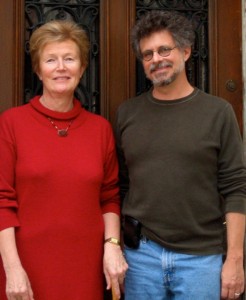 Steve Raichlen, former La Varenne student and decided grill guru, is a leading authority on modern barbecue worldwide. He recently shared his thoughts on his new book and why barbecue will always be his favorite method of cooking.

What inspired your forthcoming book to be about smoking?
Smoke is one of the must universally beloved flavors (think Scandinavian smoked fish, Italian smoked cheese and ham, and of course American barbecue). It embraces an incredibly diverse range of foods—hot smoked foods like York ham and Texas brisket; cold smoked foods, like jambon de Bayonne and beef jerky. Yet until recently, smoking had mainly been the domain of specialists. As the backyard grill has become an extension of the indoor kitchen, more and more Americans are turning to this ancient technique. And, thanks to a new generation of smokers (everything from pellet smokers to electric smoking guns), smoking has become easy and accessible for all. I’ve certainly become even more interested in smoking than I have been, so I felt like it was time for me to write a book about it.

Some of the recipes you’re experimenting with are way out. Where did you get the idea to try smoking ice cream, and how on earth do you do it?
Smoke has been described as the umami of barbecue, and like umami it intensifies and highlights flavors without camouflaging their intrinsic taste. This is true for everything from the predictable meats (beef, pork, chicken, fish) to foods you wouldn’t normally associate with smoking – from gazpacho to ice cream. Chefs have taken over the smoker. In the last year, I’ve eaten everything from smoked quail eggs (at Noma in Copenhagen) to smoked bread (at the Broadmoor resort in Colorado Springs where I hold my Barbecue University) to smoked ice cream (at the restaurant Extebarri in Spain’s Basque Country).

There are a couple ways to make it: you can smoke the cream in a smoker (or a wood burning oven as Extebarri does), then make the ice cream. Or place ice cream in a bowl, cover it with plastic wrap and insert the rubber tube of a smoking gun under the plastic wrap. Fill the bowl with smoke and let sit for 4 minutes. Repeat 2 or 3 times, then refreeze the ice cream until serving.

What is your favorite meat to cook and your favorite method for doing so, and why?
My first impulse is to say pork because it’s so iconically linked to smoking. (Think ribs, pork shoulder, bacon.) But I’d rather say beef because it’s so diverse. Beef ribs are the new spareribs—especially beef plate ribs (which tip the scales at up to 2 pounds per rib). Smoke the forward part of the steer’s underbelly and you get brisket. Smoke beef navel and you get pastrami. Smoke beef shoulder and you get Texas clod.

Why is barbecue important
Let me count the ways:
1. It tastes great—make that phenomenal.
2. It’s fun to eat because you also often do so with your bare hands.
3. It’s utterly unpretentious, yet capable of great sophistication.
4. It’s social and communal. You rarely eat barbecue by yourself.
5. It’s democratic. You can eat it at cheap funky barbecue joints and high falutin’ restaurants.
6. You can cook it in a cheap 55 gallon steel drum smoker or in an $18K stainless steel supergrill.
7. It’s as old as mankind itself and central to the human experience.
8. Man is the only animal who cooks. You could say that barbecue begat civilization and made us human.

What a pleasure it was to catch up with Steve! He was one of the first students at La Varenne, Paris, and has remained a dear friend. Click below for Steve’s desert island marinade aka Raichlen’s Rub. Enjoy! — Anne

The basic formula is 3/4 cup sea salt to 1 gallon water. It, too, you can customize by adding sugar or maple syrup, whiskey or rum, aromatics like bay leaves, lemon zest, and or cloves, and a curing salt, like Prague powder (sodium nitrate). You use this mixture to cure everything from ham to Canadian bacon to kippered salmon.

Combine all the ingredients in a mixing bowl and stir to mix. (Actually, your hands work better for mixing than a spoon or whisk does. Use your fingers to break up any lump of brown sugar.) Store the rub in an airtight jar away from heat or light; it will keep for at least 6 months.