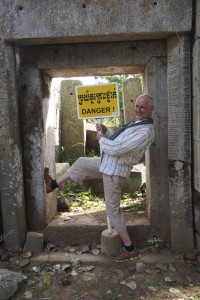 If the adage “no rest for the wicked” rings true, then La Varenne alumnus Robert Carmack must be very wicked indeed. Earlier this year, after nearly three decades living in Australia, Robert and his partner Morrison Polkinghorne packed their bags and moved to Cambodia. They just published The Burma Cookbook in March (which I wrote the foreword to!), and in the midst of their publicity tour in the U.S. and Australia they have also taken on the daunting task of opening a Bed and Breakfast.

For the last four months Robert has been renovating a three-story premise in the heart of colonial Battambang whose doors will open in November. The mission statement for the Bed and Breakfast is most inspiring: They will host styling workshops (Morrison is a textile authority and designer/photographer for The Burma Cookbook), as well as invite other international experts to come and teach the locals for free.

Robert and Morrison chose colonial Battambang for the location of their Bed and Breakfast specifically for its architectural charm and nascent art scene. And it’s not just the French colonials who can take credit for the city’s numerous mansions and waterfront shop houses; Thailand lorded over there until 1904 and the country’s contemporary architectural influence was heavily adapted from Italy. The end result is a city that feels like you’ve entered a time warp and is up for consideration as a UNESCO World Heritage site.

The dynamic duo also hosted a culinary group tour of Burma in June and July and they are already planning next year’s itinerary. If you want to be the first to know the finalized dates of the tour and keep current on what these two wickedly busy bees are up to, visit their fantastic blog The Globetrotting Gourmet.

A big congratulations and best of luck to Robert and Morrison as they take the plunge into the hospitality business! – Anne